This year’s event will feature international scientists from across the North Pacific as well as world-renowned storytellers sharing their photography, videography, books, and more. 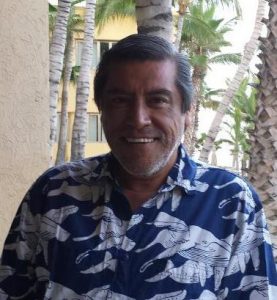 Dr. Jorge Urbán is a Professor in the Department of the Coastal and Marine Sciences of the Autonomous University of Baja California Sur at La Paz, B.C.S., where he has worked for 35 years. He received his PhD from the National University of México (UNAM). He began his research on whales in 1982 when he initiated the first long-term study on Mexico’s humpbacks. Jorge has presented papers on this topic at more than 100 international meetings and has written more than 150 scientific publications about Mexico’s Pacific whales and dolphins.

From 1991 to 1993, he served as President of the Mexican Marine Mammalogist Society (SOMEMMA).  He is co-chair of the Subcommittee of Whale Watching of the Scientific Committee of the International Whaling Commission, a member of the Cetacean Specialist Group of the IUCN, and a member of the Scientific Advisory Committee of the Society for Marine Mammalogy (USA).  He has been an advisor of more than 50 graduate and undergraduate students. Since 2006 he has served as the co-director of the Laguna San Ignacio Ecosystem Science Project. He is also the founder and leader of the Marine Mammal Research Program of the UABCS (PRIMMA-UABCS). 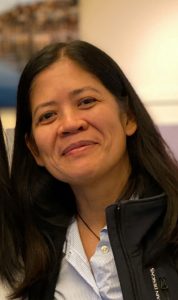 Jom is the founder and Principal Investigator of a non-profit organization called BALYENA.ORG, with a mission to support the conservation of whales and dolphins and their natural habitats in the Philippines through research, education and capacity-building. Jom began her career in research and marine conservation at WWF-Philippines as the Project Leader of the Cetacean Research and Conservation Project in 2000. It was under WWF-Philippines that she started to study humpback whales in the Babuyan Marine Corridor in the Philippines.

After leaving WWF, she continued this research by establishing BALYENA.ORG which is currently the longest-running, continuous cetacean research in the Philippines. She has a Bachelor of Science degree in Biology from the Ateneo de Manila University, a Doctor of Veterinary Medicine from the University of the Philippines at Los Baños, a Master of Science in Biodiversity, Conservation and Management from the University of Oxford, and a PhD in Marine Environmental History from Murdoch University, Perth. Her interests range from marine mammal population biology and conservation, cetacean-human interactions, biodiversity conservation, wildlife medicine, to historical and current fisheries for large marine vertebrates. Her current projects include “Conservation of the Babuyan Marine Corridor: the only breeding ground of humpback whales in the Philippines” and “In Search of Bughaw, the lone blue whale in the Bohol Sea, Philippines.” 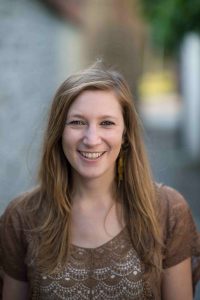 Joëlle is a Belgian marine biologist pursuing a PhD in Marine Biology at the Vrije Universiteit Brussel, Belgium. She started her career as a marine mammal biologist in 2010 and began her own research project with her non-profit organization Association ELI-S (@Association.elis) that she founded in 2016. Through Association ELI-S, Joëlle established the Cetacean Conservation Project of Nicaragua is a community-based conservation initiative based on a scientific program that gathers baseline data on whales and dolphins occurring along the Pacific coast of Nicaragua (Central America). Including local communities in her project is essential for environmental conservation.

Through her self-funded PhD she is working to understand population dynamics, distribution, and habitat use patterns of cetaceans and especially humpback whales. 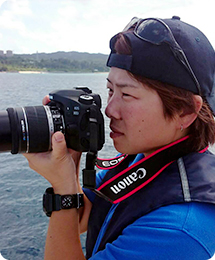 Dr. Nozomi Kobayashi is a chief research scientist at Okinawa Churashima Foundation in Okinawa, Japan and conducts and manages research studies on marine mammal conservation. She has conducted ecological studies on humpback whales in Okinawa, including distribution, migration timing, diurnal patterns in song, and interchanges between Okinawa and other sighting areas in Japan and overseas. She has been trained in marine mammal acoustics, photo ID studies, and stranding response techniques in Okinawa and Ogasawara Islands. Since 2020, she has served as the representative researcher of Japan on the steering committee of an international research project on humpback whales throughout the North Pacific Ocean.

Nozomi has been sharing the findings of her extensive research with the public through lectures and other events. She is also working with local tourism operators to create whale watching rules and management practices. 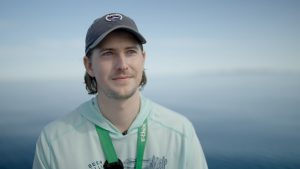 Chris Zadra is the Drones for Whale Research Program Manager for Ocean Alliance, Inc., a nonprofit founded in 1971 and based in Gloucester, MA. Chris graduated from Lehigh University in 2016 with a B.S. in Applied Science, and in 2017 with a M.Eng. in Technical Entrepreneurship. At Ocean Alliance, Chris works to develop and facilitate the adoption of novel, non-invasive UAV-based tools for marine mammal research and conservation. Chris frequently joins research teams across the globe to assist in challenging UAV-based marine mammal data collection methods such as exhaled breath collections or UAV-based tag deployments. He has been primary pilot in over a dozen field projects, collected UAV-based exhaled breath samples from 7 different whale species including bottlenose dolphins, and developed and piloted a novel UAV-based suction cup tag deployment method that has been used successfully on 4 different large whale species in 2022.

Chris created and manages the @SnotBot Instagram page, and also enjoys doing aerial cinematography for TV and documentaries. Most recently his work can be seen in the documentary film Last of The Right Whales. 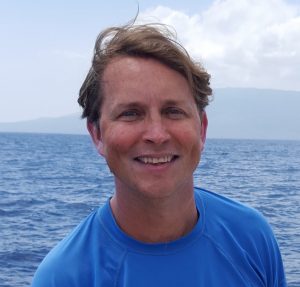 Dr. Marc Lammers is the Research Ecologist for the Hawaiian Islands Humpback Whale National Marine Sanctuary.  He is also the co-founder and President of Oceanwide Science Institute, a Hawai’i-based non-profit organization involved in marine research globally, and is an affiliate faculty member with the Hawai’i Institute of Marine Biology.  Marc specializes in marine bioacoustics, cetacean behavior and ecology, and marine ecosystem acoustic monitoring.

He is an active collaborator with many researchers in Hawai’i and around the world, and is a mentor to several graduate students.  He has worked on projects globally that have been focused on a variety of research topics and marine organisms, including dolphins, whales, coral reefs, fish and turtles. 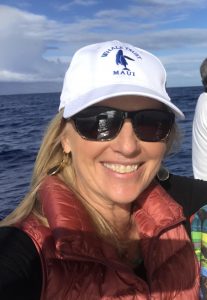 Dr. Meagan Jones has been leading marine research and education programs in Hawaii for thirty years. Her commitment to bridging marine science with education and conservation programs around whales and their natural environment led to the founding of Whale Trust, a Maui based non-profit organization, where she has served as the Executive Director since its founding in 2001. Meagan is currently an Assistant Professor in the Sustainable Science Management BAS program at University of Hawaii Maui College (UHMC), where she teaches various marine biology and sustainability science courses focused on natural resource management. Meaganʻs research focuses primarily on the reproductive strategies of female humpbacks on the Hawaiian breeding grounds. 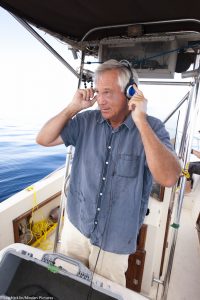 Whale Trust co-founder, Dr. Jim Darling has led research programs on whales for over 40 years. His primary studies include long-term investigations of behavior and ecology of gray whales in British Columbia and humpback whales throughout the North Pacific. Jim has been executive director of West Coast Whale Research Foundation, a Canadian research and education society, and research director of the Clayoquot Biosphere Project, a Vancouver Island community-based organization that promoted field research in the temperate rainforest ecosystem. Jim has written numerous scientific and popular articles and several books on his work. Since 1997, Maui has been the base of his study on the function of the humpback whale song.

His primary studies include long-term investigations of behavior and ecology of gray whales in British Columbia and humpback whales throughout the North Pacific – the latter arising from his PhD studies on humpback whales on Maui in the 70s and 80s.

Ed has participated in over 120 disentanglement efforts and helped free more than 70 marine animals from life-threatening entanglements. He and the Sanctuary coordinate a community-based network to provide safe and authorized response to entangled whales around the main Hawaiian Islands. 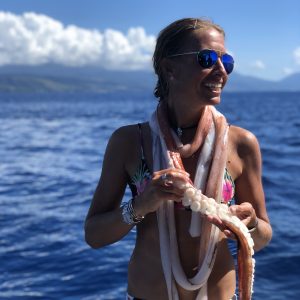 Gaelin Rosenwaks is a marine scientist, explorer, photographer, filmmaker and author of “Sperm Whales: The Gentle Goliaths of the Oceans” (Rizzoli, 2022). She began her career at the Woods Hole Oceanographic Institution conducting research in Antarctica and then earned her Master’s Degree in Coastal Environmental Management from Duke University researching Giant Bluefin Tunas. Alarmed by the changes happening in the oceans, Gaelin founded Global Ocean Exploration Inc to share her passion for ocean exploration, marine conservation and storytelling. She now participates and conducts expeditions in every ocean to alert the public not only to the challenges facing the oceans, but also to what science is doing to understand these changes.

A Fellow of the Explorers Club and Royal Geographical Society and Member of the Society of Women Geographers, she has published articles in scientific journals, newspapers and magazines and has delivered lectures at global conferences and many institutions. She has appeared as an expert and host on TV programs including on The Discovery Channel, Science Channel, CBS News, and National Geographic Channel, and is one of the few women to be featured on the cover of Outside Magazine. Her photography has been displayed in many exhibitions, including solo exhibitions at Duke University, The Maritime Aquarium, and the Patagonia Upper West Side Store in NYC. To Gaelin, a licensed Coast Guard Captain, there is nothing better than being in the open ocean surrounded by endless blue water and passing wildlife.

A childhood experience seeing a Sperm Whale has led her on her current quest to reconnect with these ocean giants and to her first book of photography, “Sperm Whales: The Gentle Goliaths of the Oceans” (Rizzoli 2022). She is also completing a film, Finding Physty, about her personal connection to these majestic animals. 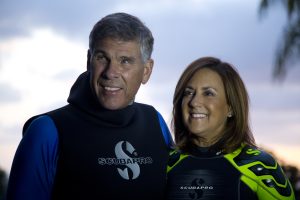 Howard and Michele Hall specialize in underwater natural history film production for television and IMAX/Giant Screen. They have produced numerous award-winning television films for PBS Nature, National Geographic, the BBC and other broadcasters, and are the recipients of seven Emmy Awards. Award winning IMAX films produced and/or directed by Howard and Michele include Into the Deep, Island of the Sharks, Deep Sea 3D, and Under the Sea 3D. 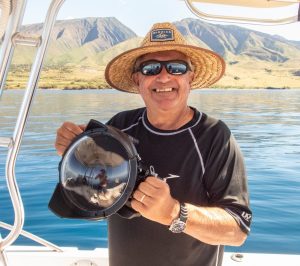 Flip Nicklin was born with both diving and photography in his blood. His grandfather dove while wearing hardhat gear for construction. His father, Chuck, was a diver and underwater cinematographer, who taught his sons to become scuba divers. By the age of fourteen, Flip was helping his father teach people to dive off of the coast of Southern California, in La Jolla.
Flip is a world-renowned underwater photographer. He has spent his career specializing in the photography of marine mammals, especially whales and dolphins. Through 20 National Geographic feature articles from 1982 to 2009, he has worked closely with top whale researchers from around the world. From this work Flip brings a unique, global perspective on the study of whales to Whale Trust. Flip has assisted on studies of humpback whales in Hawaii since the 1980s, and lives in Maui for a portion of each year.
Flip is a National Geographic Photographer and has been published in several photography books including Humpbacks: Unveiling the Mystery, Dolphins for Kids, Face to Face with Dolphins, Face to Face with Whales and Among Giants, A Life With Whales.  Flip was named Photographer Of The Year for 2012 by the North American Nature Photography Association.